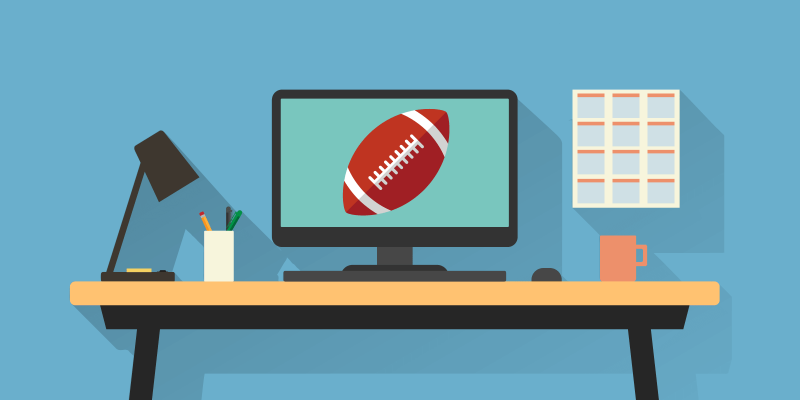 American football has a lot of fans outside of the U.S. Since the NFL (National Football League) is the most important league in American football worldwide, fans all over the globe want to watch it. Some sports channels outside the U.S. do air important games in the NFL. However, in some countries it is impossible to watch on television or through live streams. Below you will find out how you can watch the NFL wherever you are.

The American networks that air NFL games only have the distribution rights to stream the games for viewers in the U.S. Luckily, there is a way around this geographical restriction. With the use of a VPN (Virtual Private Network) you can pretend to access the internet from the U.S. while you are actually somewhere else.

Use a VPN to Watch American Football Online

With a VPN you can connect to servers that are located all over the world. If you connect to a server in the U.S. the American sports channels will assume you are in the U.S. This way you can watch any NFL game you want, including the Super Bowl. You will need to have an account with the American sports channel. This can be challenging sometimes if you do not own an American credit card. One way around that would be to get an account with Sling Television. You can read more about how this works below.

Watch the NFL with Sling TV

Sling TV is a streaming service that provides access to the content of several American channels. Normally, you would need an American address or credit card to get a subscription to one of these channels. However, a subscription to Sling TV can be bought with a gift card. These gift cards can be bought with PayPal, meaning you can do this from wherever you are in the world.

In combination with a VPN you can watch the NFL games on your Sling TV account. The VPN service will make sure that Sling TV thinks you’re accessing their website from the U.S.

Want to know more about how to find a good NFL stream? Check out our overview of the best free sports streams.

What Does a VPN Do?

A VPN is software that encrypts and anonymizes all your online activities. It protects you against hackers and others that are after your personal information. Moreover, all your data is encrypted and a VPN tunnel is set up, for your data to travel through. You connect to the internet through the servers of your VPN provider. Most providers have a lot of servers in different countries. You can uses these different servers to bypass geographical restrictions.

Thus, if you want to gain access to American streams you can connect to a server in the U.S. You will take on an American IP address and websites will think you are in the U.S. This will grant you access to their content. You can now watch your favorite NFL team play.

The Best VPN Services to Watch the NFL The best VPN providers to watch the NFL have American servers and great speeds. This means you can get access to the American channels and you won’t experience any lag during the game. Finally, a nice price and user-friendliness are also important features of a good VPN. Keeping all this in mind, we selected the following VPN providers that can be used to watch the NFL.

ExpressVPN is one of the best VPN services at the moment. Their many servers offer a fast and stable internet connection and their encryption is topnotch.

The software they have created is user-friendly. It will be easy for anybody to connect to one of their servers and set up a secure connection to watch the NFL.

With their 30-day money-back guarantee you can try out their services by watching, for instance, the Super Bowl. If you do not enjoy their services you can get your money back after the game, no questions asked.

IPVanish is probably the fastest VPN on the market. With a subscription to their services you won’t be bothered by any lag or buffering. Moreover, IPVanish has a large number of servers all over the world and decent security.

IPVanish has a 7-day money-back guarantee and reasonably priced plans. Why not try it out to stream your favorite game and see if you like the service? IPVanish is a cheap option to watch the NFL on American sports channels from wherever you are in the world.

CyberGhost is a VPN provider with premium user-friendliness and low subscription fees. This VPN service is fast, secure, and can be used to unblock any online content.

One of the most important reasons people have for choosing CyberGhost is their low pricing.

Once you get a subscription they also offer a 30-day money-back guarantee, which means you can get your money back if you do not like their services after all.

How to Watch the NFL Online with a VPN

The only thing you need to watch the NFL online, is a subscription to an American sports channel (or Sling TV) and a VPN to change your virtual location.

Some games might be broadcast in countries other than the U.S. In this situation, you can also use a VPN to gain access to these streams. You can connect to a server in the country you want to gain access to and get a subscription to the sports channel that broadcasts the NFL. If you want to be able to watch the entire league without missing a game, we recommend you check if a channel airs all the games or just the most important ones.

Once you turn on your VPN and connect to the right server you can go online to watch the NFL.

Watch the Super Bowl Anywhere in the World

The Super Bowl is the most important game in the NFL. In most countries, there will be a sports channel that broadcasts this game live. With a VPN you can watch the game on an American channel with extensive commentary. Moreover, with the free trials for VPN providers and American sports channels you can even watch the Super Bowl completely free.

Channels and Websites that Broadcast the NFL

Tove Marks Author
Tech journalist
Tove has been working for VPNoverview since 2017 as a journalist covering cybersecurity and privacy developments. Since 2019 she is VPNoverview.com's cybersecurity news coordinator.
Share this article
More articles from the "Sports" section
April 14, 2021