What is the Fastest VPN? Take a Look at Our VPN Speed Test In short: the fastest VPN

A VPN helps you ensure your online security, privacy and freedom. That’s very nice of course, but some VPNs slow down your internet connection. Although this is logical, because all your data is redirected via an external VPN server, you probably don’t want to be slowed down too much. That’s why we tested the connection speed of the most popular VPNs.

Surfshark emerged from our tests as the all-round winner. In addition to its speed, Surfshark excels in our general tests in other areas. If you want more information about this provider, you can read our review or click on the button below.

Scroll down for more about our tests and a top 3 of the fastest VPNs for both local servers and distant servers. For a pleasant internet experience, the speed of a VPN connection is important. For example, a fast VPN makes sure you don’t have to wait a long time for files to download. Connection speed also comes into play when streaming series or movies. With higher speeds you can watch your favourite films and series without bumps, knocks and long buffer times. In this study, we tested the speed of some well-known, lightning-fast VPN providers to present you our top 3 of the fastest VPNs.

In order to minimize the influence of external factors on the tests, we tested all VPNs on the same day around the same time, via a wired connection. This ensures that failures in the wifi network do not cause unfair results. First we test our own internet connection without a VPN and then the connections through various VPN providers.

To start with we want to analyse the speed of a local VPN server. For that, we connect to a Dutch VPN server from our home base in the Netherlands. Then, we test the speed via speedtest.net.

After that, we connect to an American server of the VPN provider and test the speed again. We repeat this for each provider in order to obtain a complete overview of their speeds for local servers and their speeds for distant servers.

Which VPNs Did We Test?

First of all, we tested our top 5 best VPNs. We also tested several other popular VPN providers. These include VPN providers that are known for their speed, or providers that most people already know. This is a brief overview of the VPNs we have tested:

Which VPNs are the Fastest? – Results

Our own data connection is quite fast, with a download speed of 503.51 Mbps. Therefore, we mainly look at the (percentage) difference in speed between our connection without a VPN and our connection with a VPN. This method will provide us with a better picture of what a VPN does to your connection speed. This has led to the following results.

As shown in the graph and table below, all tested VPN providers, except PIA, remain above 250 Mbps on local servers. The top 3 is made up of CactusVPN, CyberGhost, and Surfshark. Below, in the graph and table, you can find an overview of the results of our speed tests with servers located further away. Surfshark clearly stands out, but NordVPN and ExpressVPN show excellent scores as well. The speed of the mid-range VPNs in the list is around 100 Mbps. This is a good result and won’t cause any problems for most normal internet users. The Fastest VPNs at the Moment

To determine our top 3 fastest VPN providers for both the local and the distant servers, we mainly looked at the best download speed. For most VPN users this will be more important than the upload speed.

It depends on your personal wishes which VPN will suit you best. For example, it is useful to choose a VPN with fast distant connections if you want to access the American Netflix library when you are abroad.

As said, no connection we tested with a local server was really slow. So in principle, you’re good with all the tested providers in terms of speed. Even TunnelBear, as a free VPN, is very fast. However, three providers stand out: CactusVPN is a small provider, but we decided to review their speed because of their good reputation. In addition, they have good customer service and software that is simple to use. It turns out that they have the fastest servers for short distances!

CyberGhost has achieved second place in our tests. CyberGhost has always been a VPN that focuses on user-friendliness. Sometimes this is at the expense of speed, but we are pleasantly surprised that CyberGhost achieves such great speeds from local servers. It is therefore a fantastic choice for people who are new to VPNs.

Surfshark’s connection speed is quite good for the local server. As will become clear below, their distant connection is even the quickest of them all, which means that Surfshark is an overall good choice. Moreover, subscriptions are cheap and their software is very user-friendly.

While the speeds for local servers were at least reasonable for all providers, the differences for the distant servers are much larger. The top 3 looks like this: 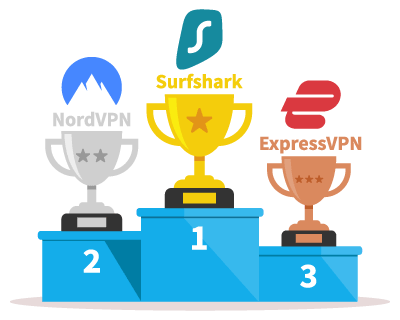 Surfshark was third for the local server test, but the connection to the distant server is even faster. So, if you’re looking for an all-round high-speed VPN, Surfshark has got you covered. The download speed when you connect to a server abroad is almost as high as that of the local one. This is exceptional!

Although NordVPN reached the second lowest place for the local test, that speed was still fine, as all providers did well. Moreover, their servers abroad are very fast compared to other providers. This, combined with the excellent security, makes NordVPN a great option for anyone who wants to unblock foreign sites.

ExpressVPN is an all-round good choice, not only because of its excellent speeds, but also because of their strict “no log” policy, ease of use and excellent safety conditions. This provider is the best in our general test for the best VPNs. If you want good speeds and amazing features in general, ExpressVPN is a excellent option.

Surfshark is absolutely the fastest VPN provider if you take both the local and distant servers into consideration. CactusVPN, NordVPN, and ExpressVPN also score well on speed. Nevertheless, speed tests remain a snapshot.

You often see that the speed of a VPN server fluctuates quite a bit. This can have all kinds of causes. For example, a certain server may be busier than normal at the time of testing. We were also unable to choose exactly the same protocol for every provider, because not every provider uses the same protocols. This may also give a distorted picture.

You should also be aware that the level of encryption differs between providers. NordVPN is known for its heavy encryption and security, but still scored reasonably well. However, this security sometimes results in a slower connection. This is a consideration you have to make yourself; what do you find most important in a VPN? If it’s speed, then the overview above is very valuable, but don’t lose sight of the other factors.

Moreover, we have not been able to include all available VPN services in our tests. We mainly chose large well-known providers. Other, less well-known providers, such as CactusVPN, we tested because they have a reputation for high speeds. Keep in mind that there are other providers out there, some of which we haven’t considered because of their absolutely awful speed results in our individual VPN reviews (Speedify VPN).

In short, when choosing a VPN, don’t let speed alone guide you. For many people, speed is an important factor, but there are also other aspects that are worthwhile. In any case, we recommend that you also take a look at our general overview of the best VPN services and our recommendations for other VPN tests you can do yourself. This will help you to make an informed choice and find the VPN that suits you best.

Do you need a quick answer to your question? Then click on one of the frequently asked questions below. Your problem might be solved in no time!

What is the fastest VPN for local servers

Cactus VPN is the fastest VPN provider for our local server. The speeds achieved by this provider are comparable to the speed of our connection without VPN, which is a very good performance. It has to be said that we came across more providers that achieved fantastic results, though. If you want to see all of them, read our full article.

What is the fastest VPN for American servers?

The fastest VPN server for distant servers is Surfshark. This provider really stood out in our speedtests. Surfshark is also an all-round great VPN provider, and therefore always an excellent choice. The speeds are very high for both local and distant servers.

What is the fastest VPN?

The fastest VPN in our tests was SurfShark. This provider achieves high speeds on VPN servers in both the Netherlands and the US. This means that streaming content through a server abroad (e.g. to watch foreign versions of Netflix) is very smooth and easy with Surfshark.

Why does the speed of a VPN vary per server location?

As the data traffic of your internet connection only has to travel a short distance if you choose a local server, the delay on your connection will be very short, or not even noticeable at all.

However, if your internet traffic is routed through e.g. the United States, it simply takes longer to reach your destination. It is therefore advisable to only use servers at locations in foreign countries if this really offers advantages, such as access to foreign Netflix libraries.

Why use an extra fast VPN?

A fast VPN is especially useful for gaming, streaming or downloading large files. Moreover, browsing anonymously can becomes rather annoying when everything has a huge delay. However, speed is not the only important asset of a VPN. We strongly recommend that you also pay attention to the privacy policy, the number of server locations, costs and userfriendliness. For the best all-round VPNs, take a look at our overview of the best VPNs.

Erik Schurer Author
Tech journalist
Erik was educated in the humanities, after which he started to investigate technological and online culture. Specifically, he is interested in privacy and net neutrality. Erik has worked as an editor, copywriter and translator for several platforms, with technology as a recurring theme.
Share this article
More articles from the "Best VPN" section
November 27, 2022