Short on time? Watch the EC worldwide with our quick guide!

With a VPN, you can easily get around geo-restrictions enforced by streaming services. This means a VPN allows you to watch any EC match, wherever you are in the world! A VPN we recommend for this purpose is ExpressVPN. This is a high-quality VPN provider with impressive streaming speeds. If you want to watch the European Championships (or any other geo-restricted content), simply install ExpressVPN on your device, connect to the right server location, go to your usual streaming service and enjoy your match!

Installing and using ExpressVPN to watch the European Championships is easy and won’t take very long. However, if you’d like some help with this process, feel free to check out our more detailed guide below. Although there are many exciting sports in the world, football (or soccer in the US) remains the most popular one. The most intriguing part of this dynamic and fun sport might just be watching different nations battling it out on an international stage. Indeed, the European and World Championships are important times for many soccer fans across the globe.

Meanwhile, the 2020 European Championship has been postponed until June 2021, due to the corona virus pandemic. Because of the postponement, football fans will want to watch their favorite players even more. As the schedule for other UEFA tournaments in the coming years will not be changed, the name “Euro 2020” will be retained.

For many residents of the European countries playing in the EC, watching the matches is easy. Most of these countries have designated companies that are authorized to broadcast these matches. This means football fans can watch (most) matches on one of their country’s main TV channels or streaming services. But what if you don’t live in one of these countries? What if you’re on holiday or abroad for work during the European Championships?

If you live in a non-European country, finding a way to watch the EC can be quite a chore. The same is true when you’re travelling. For instance, you might live in Europe but be on holiday in Mexico during the EC. Your usual streams won’t work, because they aren’t allowed to be broadcasted outside of Europe. This is an example of what is called a geographic streaming restriction. Something similar happens if you live in the U.S. and have a ESPN+ subscription. You’ll be able to watch Euro 2020 matches live with that, but as soon as you cross the border, your subscription will be of no use. After all, ESPN’s content is blocked outside of the U.S. Of course, if you don’t have a ESPN+ subscription to begin with, you won’t be able to watch the match at home either.

People from other countries, such as Canada, Australia, Japan or China face similar issues all the time. These might make it complicated or even impossible to watch the EC. However, there’s no need to worry. You won’t have to miss out on all the best moves of your favorite soccer players this year. There’s a very easy way to watch the EC worldwide, no matter where you are. Simply use a VPN (Virtual Private Network).

Watch the EC with a VPN

A good VPN comes with a couple of great advantages. One of these benefits is increased internet freedom (to watch Euro 2020, for example). How is this possible? Well, a VPN anonymizes your internet traffic by connect to a VPN server in another country. Most good VPNs will have servers in countries all around the globe. After you connect to a VPN server in a different country, your connection will get a local IP address corresponding to that server.

In practice, this means that connecting to a VPN server in the Netherlands will change your displayed IP address to a Dutch one, no matter whether you’re in the US, China or somewhere else. Many websites and apps primarily rely on users’ IP addresses to determine where they are. In other words: if you connect to a VPN server in Europe, many streaming services will think you actually are in Europe and give you access to European live streams. A VPN, therefore, can help you get around online internet restrictions.

Similarly, if you’re on holiday in Asia, you can still use your ESPN+ subscription by simply activating a VPN. Make the VPN connect to a server in the US, and ESPN will think you’re in the States and give you access to streams. Of course, this method doesn’t just work with the EC, but with all sorts of events, websites, videos, streams, and so on.

Other VPN advantages: Save money on watching the EC

Changing your IP address with a VPN can even save you money. For instance, there is a Dutch streaming app called NPO Start that allows people in the Netherlands to watch, among other programs, Euro 2020 for free. If you connect to a Dutch VPN server, so can you! As you can probably tell by now, using a VPN opens up a host of (unblocking) opportunities. But most of all, it will help you watch the EC no matter where you are in the world!

As mentioned at the start of this article, we greatly recommend ExpressVPN as a VPN to use for unblocking all kinds of streams, including those showing the European Championships. ExpressVPN is a lightning fast VPN with great streaming speeds. Using a VPN to watch the Euro 2020 is usually very easy. Here’s a quick and easy guide that shows you exactly how to do it!

Step-by-step guide: Watch the EC with a VPN

Why use a VPN (to watch the European Championships)? 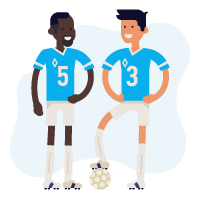 We already highlighted an important reason for many to use a VPN: if you use a “normal” connection, you might not have access to your favorite online content, such as streams showing Euro 2020. However, using a VPN while you’re online holds many more advantages. A VPN is a great way to increase your online freedom, online privacy and online security in general. After all, a VPN encrypts all of your internet traffic by using a so called encryption protocol, making it much harder for other parties to spy on you online. To add to this, a VPN guides your data traffic to an external server through a VPN-tunnel before it’s sent on to the internet. This means it also makes you anonymous up to a certain point.

In short, a VPN doesn’t just allow you to access blocked content, it also keeps you safe from big companies trying to obtain and sell your data, and from cyber criminals trying to obtain your bank details. Needless to say, although a VPN is a great privacy- and security solution, it is one of many. There are many other measures you could and should take, since these will greatly complement the added security and privacy a VPN offers. To learn more about these measures, have a look at our internet safety section.

Even so, VPNs play a crucial role in guarding your internet safety. For instance, imagine you’re on holiday and the only way to watch your favorite team compete in Euro 2020 is by streaming through a public Wi-Fi network. Public Wi-Fi networks are like virtual candy stores for hackers and cybercriminals. It’s very easy to spy on people using a public Wi-Fi network. That is, if these people don’t use the right tools to keep themselves safe, such as a VPN. There’s always a chance you might fall victim to cybercrime. However, if you use a VPN, this chance becomes significantly smaller. Moreover, if, despite the added protection, your data does end up in the wrong hands, it’ll be encrypted and, therefore, unreadable.

Can I use a free VPN to watch the European Championships?

Some VPNs offer their services for free. This might sound tempting – everything’s better when it’s free, after all. Or is it? Unfortunately, most free VPN providers can’t compete with their premium counterparts when it comes to quality and usability. For instance, many free VPN providers enforce speed or data limits. Even if they don’t, their connection will often be quite slow regardless. This is because free VPNs usually offer (far) fewer servers than paid providers. As such, their servers are often much more crowded, creating a lag.

It just so happens that both lags and data limits are often problematic for streamers. After all, you need loads of data and good (download) speeds in order to be able to properly watch a stream. As we’ve seen above, this is exactly where many free VPNs perform sub par. This is why, if you’re looking to save money, we’d rather advise you to consider getting a cheap VPN. Here’s one you might want to try out.

If you’re looking for a VPN that manages to combine great quality with a low price, we wholeheartedly recommend Surfshark. Surfshark is a relatively new VPN provider that offers a large number of fast and stable servers, user-friendly apps and a host of useful extra options, such as static VPN servers and a double VPN connection. You’ll be able to get all this for just $1.99 a month. Moreover, Surfshark offers another great advantage. It’s one of the few providers that allows you to use one subscription on as many devices as you want. In short, if you don’t want to miss a single EC goal, but don’t want to break the bank either, Surfshark is the right VPN for you!

Do you have a question to which you need an answer quickly, without having to go through the entire article first? Then take a look below and maybe your problem will be solved in a few seconds.

Especially if you are outside Europe, it can be difficult to watch the European Football Championship. On the one hand, this is because countries outside Europe do not have the broadcasting rights of Euro 2020 – after all, they are not participating. On top of that, if there are any broadcasts, the matches often have commentary in the local language. So, if you want to watch the World Cup in a pub, for example, you may not understand anything.

With a VPN, you can watch the European Football Championship abroad. If you use a VPN, you connect to the internet via an external server. This means that you could be in the Bahamas, so to speak, while you are connected to a VPN server located in the UK. This gives you a British IP address, which lets you watch the matches with English commentary.

The use of a VPN is completely legal in most Western countries. However, there are other countries where this is not the case; think of regimes like China or North Korea. So, always be careful and check the laws and regulations of the country where you are. For more information, read our article on the legality of VPN services.

What is the best VPN to watch the European Championships abroad?

The VPN we recommend for Euro 2020 is ExpressVPN. This provider is excellent on several levels. High streaming speeds, good security, and a no-log policy. So, if you want to watch the European Championships abroad with commentary in your own language, we recommend installing this VPN.

When will the European Championships (Euro 2020) take place?

Because of the Corona pandemic the UEFA European Championships didn’t go ahead as planned. We will have to wait until 11 June 2021 for it to start, and on 11 July 2021 we’ll know who takes home the cup. Let’s hope our patience will be rewarded!

Nathan Daniels Author
Tech journalist
Nathan is an internationally trained journalist and has a special interest in the prevention of cybercrime, especially where vulnerable groups are concerned. For VPNoverview.com he conducts research in the field of cybersecurity, internet censorship and online privacy.
Share this article
More articles from the "Sports" section
January 19, 2021