Many Airbnbs have cameras installed, especially in the US, Canada and Singapore 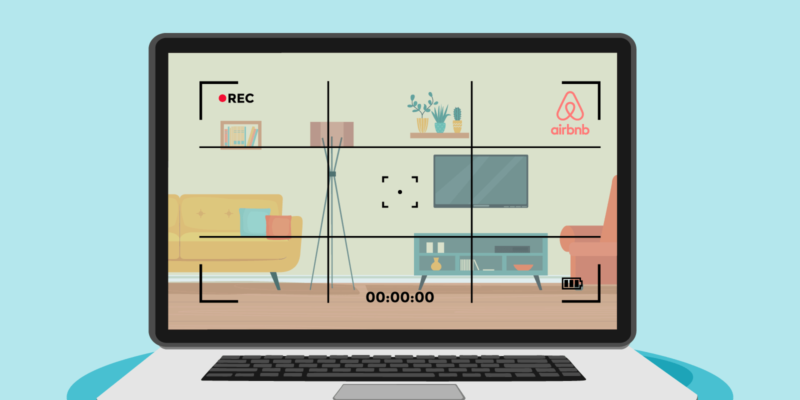 People use Airbnb to book all kinds of vacation rentals and homes around the world. But what many vacationers aren’t aware of is that they might be observed by the landlord. It is possible that, when you’re staying in someone else’s house via Airbnb, you’re being recorded. On what scale does this occur? And where in the world are guests most likely to be filmed? We aimed to find answers to these questions in the current study.

(Security) cameras should be mentioned on Airbnb listings, but this is not always the case

In the description of their Airbnb accommodation, hosts nowadays have to report the presence of a (security) camera. An analysis of nearly a million Airbnbs by VPNoverview shows that 1 in 132 Airbnbs has one or more cameras.

In addition to the Airbnbs that are known to have cameras, hidden cameras are regularly discovered by guests. Such was the case in the Netherlands, where a host was caught filming three French guests. He had to perform 100 hours of community service because he installed a hidden camera in the bathroom.

These kinds of stories erode the traveler’s trust in Airbnb. In the United States, trust in Airbnb hosts was surveyed in 2019 with a survey of over 2,000 users of the popular rental platform. Of all respondents, 58% were worried about hidden cameras. Not entirely unjustified, as more than one in ten guests had already found a hidden camera in an Airbnb accommodation.

In addition, some Airbnbs contain multiple cameras (36.5%). A large proportion of Airbnbs with indoor cameras have a camera in the hallway (44.4%). A lot of footage is also captured in the living room (30.2%).

Los Angeles has the most Airbnbs with cameras

However, you are most likely to be filmed when you stay at an Airbnb in Singapore. Although Singapore has fewer Airbnb locations with cameras in total than the cities in the aforementioned top 5, Singapore also has way fewer Airbnbs in total. Even though there are 387 Airbnb locations in Singapore with (listed) cameras in total, there are only about 7,353 Airbnbs in total as opposed to Los Angeles’ 35,512. This means that in Singapore, 1 in every 19 Airbnbs has cameras installed, while in Los Angeles this number is just 1 in 46. This makes Singapore the city with the highest relative number of Airbnbs with (listed) cameras.

Interesting to note is that there aren’t many cameras at Airbnbs in Beijing, even though China keeps a close eye on its citizens. After Munich and Bordeaux, Beijing has the fewest Airbnbs with camera surveillance: for every 3333 Airbnbs, there is only one where cameras are registered.

The number of accommodations with cameras varies greatly from place to place. European countries have a relatively low number of Airbnbs with cameras in comparison to the rest of the world. In Europe, only about 1 in 500 Airbnbs are reported as having a camera on the premises. In non-European countries, the number of mentioned cameras is much higher, with 1 in 70 Airbnb locations having at least one camera.

How can you detect the presence of hidden cameras?

The amount of filming happening at Airbnb accommodations is likely to be higher than what we’ve listed above. As mentioned earlier in this article, more than ten percent of Airbnb users in the US have already found a hidden camera in an Airbnb. Meaning that there are bound to be Airbnbs that aren’t being transparent about any cameras they might have on the premises. This does, however, make it even more important to pay close attention when entering an Airbnb. There are a number of steps you can take to reduce the chance of being covertly filmed during your stay.

Secret cameras are regularly hidden in small digital devices. Think of an alarm clock, a router or a digital photo frame for example. If you see that there is a lens hidden somewhere, or that an object looks different than what you would expect it to look like, try to see if you can take out the cameras power source.

Some fire alarms also contain a hidden camera. If you see a fire alarm with a clear lens, you can put a sticker over it to protect your privacy.

Nowadays, spy gadgets are a whole industry, which makes it increasingly difficult to recognize and discover hidden cameras. If hidden cameras are incorporated into a digital device, they are usually directly connected to the power grid and could be filming continuously. But cameras can also be concealed in non-digital everyday objects. They often work using a battery in combination with a motion sensor, or they can be set to take pictures at exactly the right time. In any case, be aware that hidden cameras today really come in all shapes and sizes (air fresheners, plants, notebooks, pens, clocks, lamps, screws, etc.). Such hidden cameras are easy to obtain and can be ordered online. Take a look at your phone to see which devices can be found using Bluetooth. Is there a device that you can’t pinpoint, then it might be that there is a wireless camera somewhere.

There are apps that allow you to check which devices are all connected to the same wifi network. Many hidden cameras are connected to wifi.

With an app like Fing, you can try to scan the network with your Android device or iPhone and see if any suspicious devices are connected.

To make sure that you’re not being filmed in your Airbnb, it’s recommended that you do a brief search of the accommodation. Look in places you think may have a camera hidden: open the cabinets, look under the sink, and in the plants, for example. Check the bedroom and bathroom thoroughly, a careful look can’t hurt.

Another tip: turn off all the lights, close the curtains, and shine a flashlight through the room (using your smartphone for example). Do you see something reflecting the flashlight? Then check that spot, because it could be the lens of a camera.

A total of 50 cities were researched using Inside Airbnb data to get a clear insight into cameras at Airbnbs around the world. Of all cities researched, 27 were within Europe, and 23 were outside of Europe.

The study included all listings from Airbnb that were available in specific cities by June 2020. In total, the presence of cameras was researched using 992,168 Airbnb listings in the cities mentioned. Our research team analyzed whether the word “camera” was mentioned in the description of an Airbnb listing (which is mandatory for Airbnbs with camera surveillance).

There was one exception for Italian cities: ‘camera’ in Italian means ‘room’. Of course, this word was very common in the Airbnb listings. That’s why we looked at which words often appeared in listings of other cities in combination with the word ‘camera’. Using these words, the Italian listings were examined, so that we could still determine whether or not the Italian listings mentioned the presence of a security camera.

David Janssen Author
Cybersecurity analyst
David is a cyber security analyst and one of the founders of VPNoverview.com. Interested in the "digital identity" phenomenon, with special attention to the right to privacy and protection of personal data.
Share this article
More recent news about Privacy
March 2, 2021