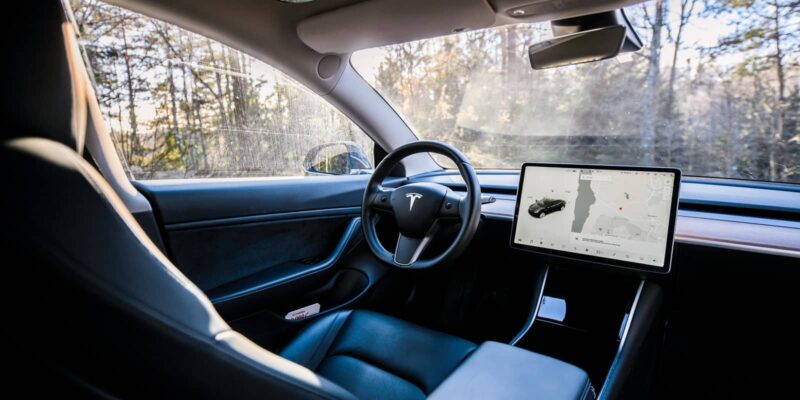 Several Tesla models capture and share video footage of drivers and passengers using in-car cameras. The information can be used to monitor whether a driver is paying attention, for example. It can also assist Tesla with the development of their full self-driving software. Nevertheless, Tesla’s use of vehicle cabin cameras poses a privacy risk, according to the US magazine Consumer Reports.

Consumer Reports criticized Tesla’s use of in-car cameras to develop and improve its full self-driving (FSD) software. The publication noted that such practices raise privacy concerns. The FSD Upgrade has been in development since 2016 and entered mass production in 2019. The FSD chip can be retrofitted in existing Tesla models.

In a recent tweet, Elon Musk confirmed that Tesla is using in-car footage from vehicles that are part of the ongoing FSD Beta program. “FSD Beta has now been expanded to ~2000 owners & we’ve also revoked beta where drivers did not pay sufficient attention to the road. No accidents to date. Next significant release will be in April. Going with pure vision — not even using radar. This is the way to real-world AI.”, the tweet read.

Tesla’s driver monitoring system, of which in-car cameras form a part, drew major criticism from Consumer Reports. Jake Fisher, senior director of Consumer Reports’ auto test center, shared his views on the system. “If Tesla has the ability to determine if the driver isn’t paying attention, it needs to warn the driver in the moment, like other automakers already do”, he said.

Turned Off by Default

Both the Model 3 and Model Y are equipped with driver-facing cabin cameras. Tesla installed them above the rearview mirror. The Model S and Model X refresh, which are expected to hit the market shortly, also feature in-car cameras. Further, the electric vehicle manufacturer wants to use the monitoring system in their Robotaxi’s. These should be operational by the end of 2021 or early 2022.

Although the cabin camera is deactivated by default, drivers have the option to enable it. Once enabled, the monitoring system can share video of the moments just before an automatic emergency brake or crash. It also helps Tesla develop future safety features and improvements. Unfortunately, people who enable the monitoring system may not be fully aware of how much information they are sharing.

Moreover, the simple fact that the driver monitoring system records, saves and transmits footage, raises a whole raft of privacy concerns. Third-parties could potentially access data, for example. Or the system may be redesigned at a later stage for other business purposes. However, probably the most concerning at this stage, is that Tesla is not being entirely transparent about how the monitoring system is being used. There are also insufficient privacy safeguards in place.

This contrasts with strategies used by other automakers, such as BMW, Ford and General Motors. They all use infrared technology to identify a driver’s eye movements or the position of a driver’s head. Furthermore, all these car manufacturers do not record, save, or transmit any data. The information is used solely to alert a distracted or drowsy driver and/or slow down the vehicle if the driver does not respond to audio or visual warning signals. Consequently, they do not pose the same privacy risks as Tesla’s system.

“We have already seen Tesla blaming the driver for not paying attention immediately after news reports of a crash while a driver is using Autopilot,” said Kelly Funkhouser, Consumer Reports’ program manager for vehicle interface testing. “Now, Tesla can use video footage to prove that a driver is distracted rather than addressing the reasons why the driver wasn’t paying attention in the first place.”

Sandra Gyles Author
IT communication specialist
Sandra has many years of experience in the IT and tech sector as a communication specialist. She's also been co-director of a company specializing in IT, editorial services and communications project management. For VPNoverview.com she follows relevant cybercrime and online privacy developments. She rigorously tests the quality of VPN services using VPNOverview.com's dedicated VPN testing protocol that has been finetuned and optimized over the years.
Share this article
More recent news about Privacy
August 2, 2021